Thor’s QAM modulator is the easiest way to view FULL HD programming on your very own RF channel. This unique encoder will allow you play any HDMI compatible device tuned to any channel of your choice. Thor Fiber’s engineers will preprogram your device for easy plug and play access allowing you to view any video or digital signage on 4 separate QAM channels on your RF infrastructure. Top solutions include Blu-Ray, DVD, Set Top Box, PC, Video Game System, Digital Signage, Security Camera, or Video Insertion on existing Cable TV channel lineup. Creating your own TV Channel has never been easier using a Thor QAM-IP chassis with Web Management. View your programming on the most beautiful 1080i or 1080p quality video as Thor has the highest ranked quality encoder. You no longer have to spend tens of thousands of dollars to view the perfect image. Call today to speak to our sales engineers to learn why quality does matter. Make your business stand out with the lowest cost and highest quality encoder modulators on the market today.

Thor HDMI to QAM modulators combine 1 to 4 HD hardware encoders with a multiplexer and agile QAM modulator.  This platform is ideal for corporations or broadcasters needing to distribute multiple channels of HD programing over coax networks for MATV (Master Antenna Television) or CATV systems.  QAM modulation is used in many cable TV systems throughout the world; including North American and European systems.  Thor QAM-IP systems support both DVB-C and North American cable (ITU-T J.83B).  The most common application for this system is to add additional channels of HD content to existing MATV or CATV channel lineups; or for local generation of full HD Cable TV feeds.  The output of each modulator can be combined with exisiting cable, or with the outputs from other modulators to populate the entire RF broadband spectrum.  Depending on firmware, a QAM-IP or QAM-IPLL chassis will output 1 to 4 adjacent QAM carriers with up to 38 Mbps of bandwidth each.  The additional bandwidth space can be populated with externally generated programing via an ASI input terminal. The ASI input can accept MPTS programing at up to 120 Mbps of bandwidth for distribution.

Thor encoder modulators are available for all major world television systems.  Quadrature Amplitude Modulation (QAM) is commonly used in cable TV systems due to its high bandwidth abilities.  The International Telecommunications Union (ITU) defines the standards for QAM under the J.83 standard.  Thor QAM-IP chassis support all three primary J.83 QAM standards; ITU-T J.83A, J.83B, and J.83C.  Any QAM-IP chassis can be set to output RF carriers under either of these three standards without the need to change firmware.  J.83A and J.83C are primarily used in European systems and are commonly known as DVB-C.  US cable TV systems are based on J.83B, which in the United States is commonly referred to simply as "QAM".  QAM-IP chassis are available from Thor with many different types of video input and encoder cards. These encoder modules are independent of the modulator chassis system.

The HDMI video standard is commonly found in consumer and profesional devices all over the world. It is a versitile connector with many parallel lines for bi-directional communication.  The latest standards support full rate HD video at 1080p60 with new standards being released to support ultra high resolution 4K video. Thor encoder cards support any HDMI input from any device that provides HD video output in standard HDTV resolutions and aspect ratios.

Thor HDMI-QAM-IP line of encoder modulators are designed for high quality distribution of broadcast quality video over coax cable.  These systems are available in many configurations for a wide range of applications.  This page covers models for a specific input video type combined with a modulator chassis programed for a specific output format.  It is important to note that encoder card types can usually be combined with encoder cards for other video types.  For custom model configurations please contact Thor directly for pricing and availability.  While most firmware for Thor modulator chassis is inter-compatible; not all hardware will work with all software. Thor representatives are available for free design and consultation service.  If you have any questions or concerns about a Thor system, contact a representative directly at 1-800-521-8467. 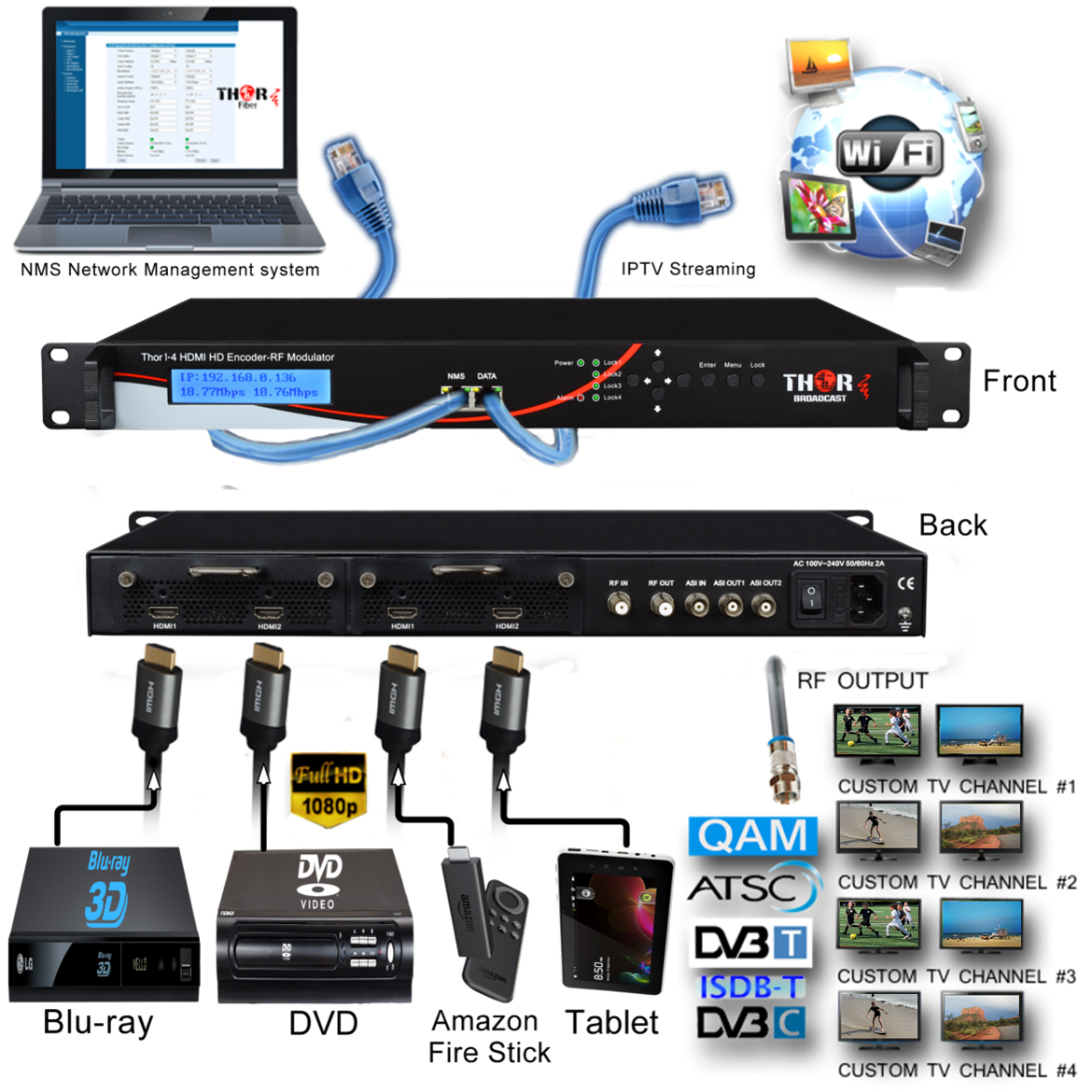 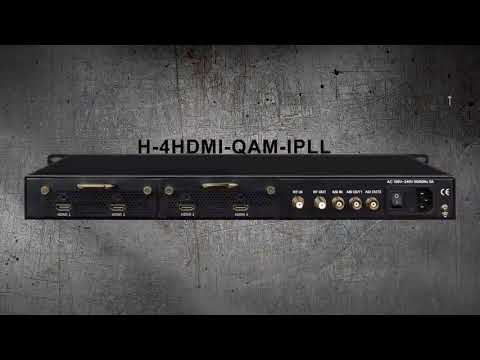 
We have several ways to do that :

Please check those products :
H-MPEG2-H264-E2  HDMI IN -ASI OUT
https://thorbroadcast.com/product/all-inputs-iptv-streaming-and-asi-hd-encoder-608-708-captioning-8230.html

facebookGoogle
The product has been added to the basket:
1- 4 HDMI to QAM Modulators and IPTV Streaming Encoders 1080p/60
Go to shopping cart
Similar products:

The H-16HDMI-RF-AMOD is a 1RU rackmount HDMI input, agile modulator, that will convert all of your 16 HDMI SD HD inputs into NSTC/PAL/ SECAM analog RF Channels