The new high capacity H-12HDMI-QAM-IPLL Encoder Modulator from Thor Broadcast has a new sophisticated redesigned platform for enabling modulation of up to 12 HDMI sources and 12 CVBS CC(Closed Caption) sources simultaneously. This unit has the ability to ingest IP Transport Streams and multiplex them among the RF output channels, similarly you can also input a single ATSC (or other RF modulation standard) and add its transport streams among the QAM output. This unit comes standard with a plethora of options to help you add extra transport streams from various media to build your own RF headend quickly and easily without extra hardware.

This unit has the ability to multiplex, create, and add program streams to your RF QAM cable channels cost-effective design make this device widely used in variety of digital distribution systems such as CATV headend cable systems

Create your own digital signage systems, and add HDMI sources to your existing QAM cable system in a single 1RU high density encoder modulator from Thor.

The Thor Broadcast HDMI Encoder modulator can be set up as a multi-channel video switcher so you can put multiple videos on one RF 6mhz frequency.

Since QAM 256 contains 38Mbps data storage, it means we can use all that bandwidth to place several programs via multiplexing on a single RF channel, each 6Mhz can carry any encoded video bitrate so long as they don't exceed the 38mbps total. For example, if we have a 4 source modulator, we can set the encoded bit rate on each video to 9.5Mbps, so 9.5 x 4 =  38Mbps. We can fit all of those programs in one QAM 256 channel.

This is important in case we want to insert multiple video programs on limited RF space occupied by different channels from the cable company; or other modulators creating channels in your CATV lineup. 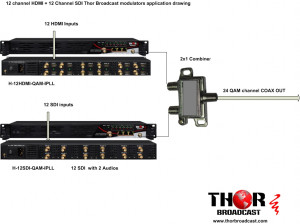 Question:
As you know, the manual states that I am supposed to use DATA 2 for the IP Stream output. As we noted under the IP Stream settings, DATA 2 is the only port that is referenced for IP Stream output. I can prove that DATA 2 is the IP Stream output, as when I disable the TS output on DATA 2 my data activity at the switch ceases on both Data 1 and Data 2 ports. Also, when I have the TS output enabled for Data 2, I only get switch activity when Data 2 is connected to the switch. Disconnecting Data 2 while Data 1 is still connected stops the switch activity. Another observation: When I have set the DATA 1 IP to 10.0.17.20, I can ping this address when either the DATA 1 or the DATA 2 cable is connected. This tells me that DATA 1 and DATA 2 are using the same IP Address.

Question:
When you were helping us with configuration, When I had asked about RF channels output 13-16, you mentioned they could be used for the local antenna connection. So, Is it possible? how would I proceed? I have an HD ATSC antenna hooked up to the RF Input on the front is that a good starting point? In TS Config, #7: Tuner 1 (prog:0) has no dropdowns.

Answer:
Yes, you can connect the standard ATSC antenna to the RF input. Please Center ATSC frequency for your local programming, you can find it in this nocable.org website by typing your zip code For example in Torrance, I can see a strong signal CH 31, center frequency 575Mhz KCBS + 1 subchannel CBS LOS ANGELES, CA 2 N (28 miles) UHF 572 Mhz Set this center frequency in the tuner and Parse this input in TS tab, it will find all TS' in this channel, you can select any of them and move it to the QAM frequency output.

I would love to know those options! We may have future expansions, but the best thing I liked about this is I could cram 6 sub-channels on each channel, I am wanting to add in as few channels as possible for right now.

And we would just need the RF output, but we may investigate IP solutions in the future.

We are now stuck into pushing slides out for menu boards and logos around the building, we have some computers that auto boot into playing graphics full screen that we can update on the fly with jpegs or whatever we need. I am wanting to take those, push them in to our RF system so we aren’t having to sneaker-net usb drives to the TV’s anymore.

In addition to that, (separately, but I’d like to generate some numbers for my boss so we can hopefully futureproof now vs react later) I am looking at needing a RF over fiber since our main head end (our plant/distribution center) is getting full (equipment-wise), I want to expand to our second location since we will have more buildings coming online in the future, and I am seeing that we may need more of these still graphics/computer feeds.

That 12 Channel HDMI Encoder modulator
If you just plan on displaying still images, we do have other options as well, if you need a total of 12 HDMI inputs, you can just use an RF combiner.
Do you just need the RF output? Or do you need the IP output as well?
Any more pertinent details about your application can help us point you in the right direction for the gear that best fits your needs.
------------
2
Are you currently doing 6 sub-channels per RF CATV Frequency right now?
QAM 256 is relegated to 38Mbps of data rate.
So theoretically, if you're just putting still images on the screen that could work just fine, each stream would need to be encoded at about 6mbps  (38/6 )
We do not suggest that many programs per RF if they're actual video programs.
We have the perfect solution for RF over fiber, several different units, please let me know what is your Optical fiber distance and if this is a point to point or point to multipoint application
Those are the links to the TX and RX for your reference.
https://thorbroadcast.com/product/32-mw-catv-rf-over-fiber-tx-45-870-mhz.html
https://thorbroadcast.com/product/catv-rf-fiber-receiver-high-rf-power-rack-8230.html
Documents

facebookGoogle
The product has been added to the basket:
CATV RF MODULATOR - HDMI Multiplexer
Go to shopping cart
Similar products: