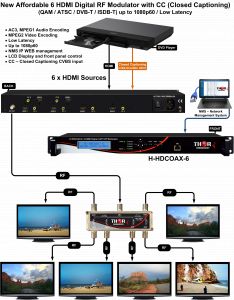 The signal source could be from any STB, satellite receiver, closed-circuit television cameras and antenna etc. Its output signal is designed to work with any TV or STB. Because it comes standard with every RF modulation standard builtin, this device can work anywhere in the world in a plug and play format.

This unit is similar to our popular line H-1,2,4 HDMI-QAM-IPLL product line, but it has some differences .It is less expensive unit, each program is modulated on its own frequency , CATV RF ouput only, no IPTV output 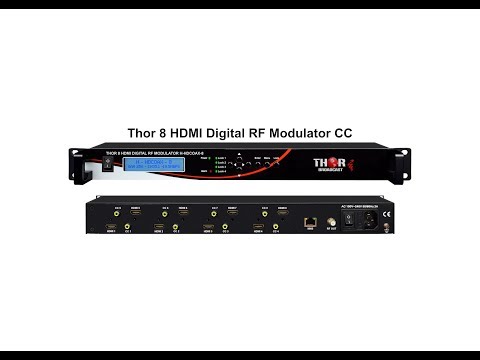 1, 2, 4, 8 HDMI Digital RF Modulator with CC-Closed Captioning QAM, ATSC, DVB-T, ISDB-T up to 1080p
Thor Up to 8 HDMI Digital RF Modulator CC is an all-in-one device integrating MPEG2 encoding and modulating to convert audio video signals into DVB-C T ATSC ISDB-T RF out. Supports HDCP, so it could be used with any DVD player or Set-top box or Sattelite tuner The unit generates separate CATV RF NONadjacent frequencies, it could be used in any country. Lowest price per HDMI channel on the Market, Technical support at no cost, pre-setup available https://thorbroadcast.com/product/1-8-hdmi-digital-rf-modulator-cc-closed-captioning.html
Model Selection
Specification
Question and Answers


If I have (8) DTV boxes connected to all (8) HDMI inputs, does the normal CC produced by the DTV boxes make it to the TVs, and is it displayable? I understand that I can turn on CC on the DTV box but that would display on every TV tuned to that channel. Ideally, I would like to use the TVs built-in CC ability to allow people at each TV to turn on/off CC - independent of whichever DTV box/channel they are displaying. Can you let me know what I can expect? If CC is not transmitted to the TV, how can I take advantage of the CC RCA input on the back with the DTV boxes? Thanks for your help in advance..

I was looking at the commercial DTV boxes (H24) and did not see a CC output. Is there a current model that supports this that I should try to get?

You need to make sure the modulator is hooked up with HDMI and the CVBS as well. HDMI doesn't carry Line 21 data, that data actually has the CC. Without taking the CVBS from the DTV box and into the HDCOAX-8 you're only passing audio video to the modulator and not the CC. Once you hook up the CVBS ports from the STB to the modulator it will work right away.
The HDMI video doesn't carry separate CC, if you turn the CC on the STB, it will become part of the Video image which we will encode it, it will be always on the RF,
You can connect HDMI from the STB as a source of the Video and Audio and separate CVBS baseband video output for the same STB as a source of CC -closed captioning, our modulator will detect and read the CC information for the analog video CVBS signal encoded on line 21.
The modulator will generate a separate CC608  strem together with the MPEG video and audio strem, from this analog CVBS signal.
Now, you will be able to turn ON/OFF CC on this specific channel on the TV using the remote control 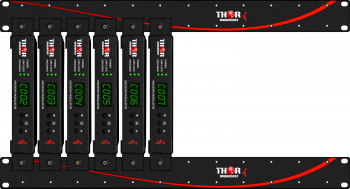 The Thor Compact RF-PETIT Digital Modulator is already designed to be sleek and easily installed anywhere. To make life easier, Thor Broadcast also has a compatible rackmount kit that can be installed in a 19" 1RU rack for simplicity. This rack system provides the horizontal racks that can quickly mounted to any 1RU rack; the multi-unit sets already come with the rack mount hardware so you can attached the rack ears to the Petit's and then fasten to the horizontal bars in the Rack. Easy to deploy and simple to setup, holes are pre-drilled in the units so you can get your units up and installed efficiently. This quick and easy installation process allows you to vertically mount up to 12 HDMI-RF-PETIT units in a rack with easy access to the inputs and outputs of the device.